Things That Make You Go Hmm...: Elena and the Amazing Technicolor Dream Suit 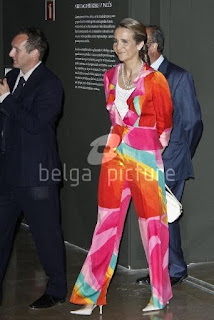 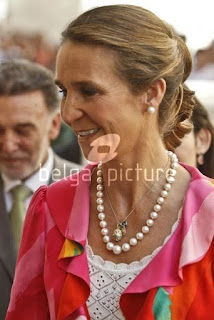 At the inaguration of the exhibit, "The Sacred Made Real"
Hmm.  What's the deal?  Infanta Elena was once one of the most stylish royal ladies (certainly, the most stylish of the Spanish royals).  Christian Dior, Chanel, Oscar de la Renta and more could be found in her closet.  Many posit that this was the work of her ex-husband, Jaime de Marichalar, who enjoyed frequenting fashion shows and was once described by TIME magazine as "an eccentrically dressed dandy".  I suppose I'd always hoped that either some of that style had rubbed off on Elena or, more optimistically, that she'd always had it in her.  But it looks like I may have been sadly mistaken.

Since the divorce, she's gone Spanish influence turned Old West saloon at Crown Princess Victoria's pre-wedding dinner and concert, and then bullfighter extraordinaire at the wedding itself.  And now there's this, a suit belonging on the stage to be sure (and who knows where when combined with a crochet shirt and double necklace...).  Are the days of the tasteful and stylish Infanta gone for good?