I will admit, Letizia is not my favorite flavor of royal in the first place, but this.... 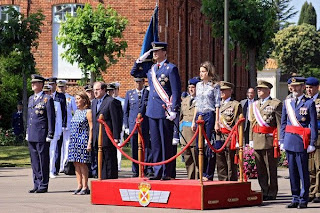 This is not so much a "hmm..." situation as a "WTF?!?" situation.  I'm not talking about the outfit itself: no, this is fine for, say, a day at your average khakis-acceptable workplace.  But that's not what she wore it for.  She wore it for a military graduation ceremony.  Where her husband, and all the cadets, were gussied up in their shiniest Class A uniforms.  Where she was going to stand up on a podium and review all of them. 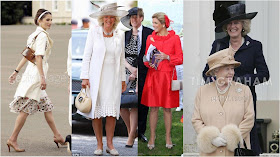 Which one of these is not like the other?   I know she isn't really a hat-sporting sort of royal, but come on.

What bothers me most is that this appears to be a trend for Leti.   She's grown increasingly casual since the early days of her marriage, but in the past few months it seems to have spiraled out of control. 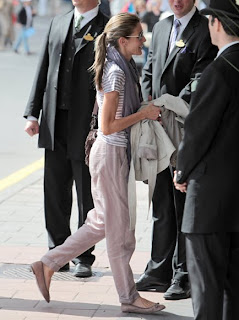 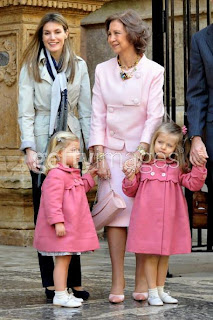 I suppose you could excuse her overly-casual arrival outfit to Stockholm (left) ahead of Crown Princess Victoria's wedding, but I found it telling that her husband arrived right alongside her wearing a suit and tie.  And even if you can write that off as a casualty of travel fatigue, how do you explain what she wore to Easter mass (right)?  Especially since she sported a similarly casual ensemble to a cathedral event alongside her husband in June.  What's going on here?

I know a lot of people find her easy to relate to, and probably the dressed down thing goes along with that.  But there's just no magic here - is it wrong to expect that of a future Queen?