Yet another thing I'm way late in covering: another royal twin appearance!

Mary sported this gown first in white at Victoria's private pre-wedding party, followed by Victoria herself in the gray version while on duty with Willem-Alexander: 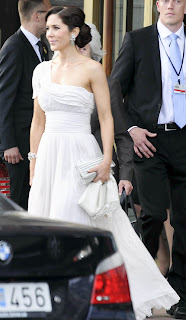 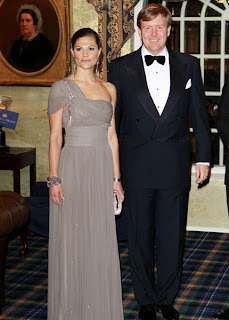 You think Victoria and Mary had a little fashion chat at the party? That's the scenario I'm going with, just because the picture of a couple of princesses sneaking off for a bit of girl talk makes me smile.

This, of course, is from Malene Birger:

Now, here's something I thought might be fun: let's put it to a style duel and see who wore it best! Cast your vote below: