I meant to post over the weekend, my lovelies, but I ended up snowed in miles away from my laptop, a blizzard keeping me from my snark. Good thing reader Deidre emailed today to remind me of the overwhelming need for a post. I've never met Deidre, but I sense she's got that Claudia Schiffer look to her, topped off with an Einstein brain. Anyways: we shall continue forward in the spirit of "better late than never", for it is the most wonderful time of the year - that's right, time to award some Nobel prizes!

Norway kicked things off, awarding the Nobel Peace Prize on Friday with a concert on Saturday, and the rest of the prizes were of course awarded on Friday in Sweden with the traditional King's Dinner following on Saturday. To the clothes!


Most Typical
Queen Sonja at the Peace Prize ceremony, Princess Christina at the Nobel Banquet, and Queen Silvia at the King's Dinner 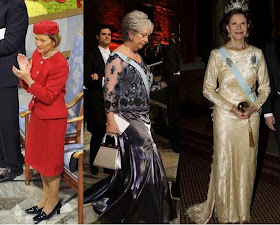 Nothing much to see here, friends. Queen Sonja held down the sartorial fort in Oslo with Mette-Marit out and about on her world travels, and she didn't venture a foot outside her comfort zone. I mean, sure, the hat's kinda oddball, but that IS her comfort zone. Princess Christina turned in a perfectly respectable appearance at the Nobel ceremonies in Sweden on Friday, and Queen Silvia did the same on Saturday (though I do not like that tiara and I can not be convinced otherwise). 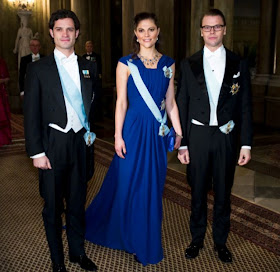 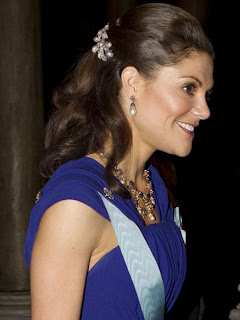 I can't hate on Crown Princess Victoria in a jewel-toned Elie Saab gown. That would be sacrilegious. But I can admit that this just wasn't the right occasion. There's too much going on at the neckline here for a necklace and a sash. Plus, that's some black tie hair right there. (What is up with that 'do? Part of the reason why the Nobel functions are so fabulous is because the Swedish ladies turn the tiara hair volume up to 11. This does not go to eleven.) 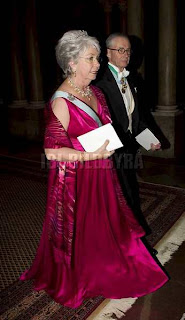 Yes, we've seen this one before, at Victoria's wedding. But it's fab, and thus she shall be excused from repeating a gown during the Nobel festivities. Yet again I fall prey to the allure of a luscious jewel tone. 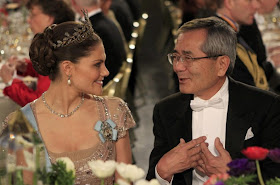 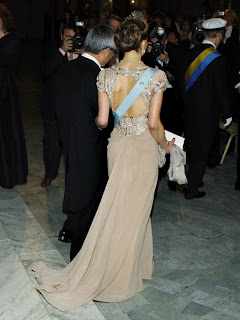 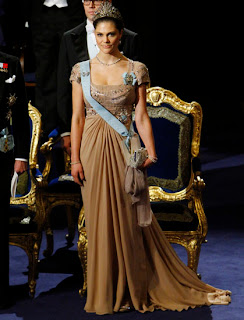 Oh, yummy. Elie Saab again, and this time absolutely perfect for the white tie event. The draping, the back - I mean, jumpy claps! It's even managing to make that steel cut tiara look alright (Napoleonic dress, Napoleonic tiara - nice), though this is yet another piece I can not get down with. It's just so...plume-tastic. And there's no diamonds on it! Come on now.


Best Use of Color
Queen Silvia at the Nobel Banquet 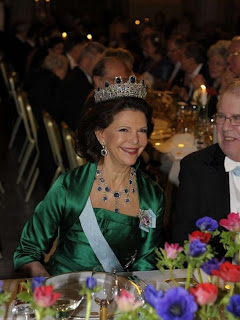 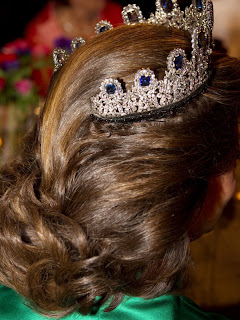 Combining colored jewels with colored gowns is dicey business. (Think back to Mary's combo of rubies and that mint-ish green dress at Victoria's wedding, or Sonja's coral and emerald pairing at the same event. Risky business.) But this - now, this was a good call. The sapphires and the green dress just play so nicely together. Well done, and the hair gets an A+ as well for having just enough volume to balance out the weight of that tiara.


Worst Use of Color
Queen Sonja at the Nobel Banquet 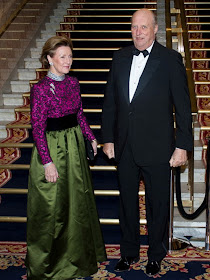 Well, this is amusing. Army green and fuchsia? Really? With a black cummerbund? Someone please tell me this is a recycle from an era gone past. I think what I like best is that she took such an overwhelming color combo, busied it up by contrasting the fabrics, paired it with an overwhelming pattern on the top, and then topped the whole thing off with MORE pattern - brooches and a choker that might as well be part of the dress, that neckline's so high. The magpie in me can't help but admire the spirit.

Who made your best dressed list for the Nobel Awards this year? Speak! Type!