Yesterday, the gowns; today, the tiaras. It was a slew of favorites and old faithfuls on parade in 2001, beginning the Norwegian ladies themselves: 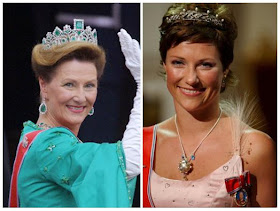 Queen Sonja (left) wore her most impressive piece, Empress Joséphine's Emerald Tiara - fitting for the wedding of the heir, wouldn't you say? Princess Märtha Louise (right) wore King Olav's Gift Tiara (a gift to her for her 18th birthday from her grandfather, King Olav), though obviously the real jewel of discussion here is that necklace. I think she was concerned that the reception wasn't going to rock hard enough, so she brought her own disco ball. Just in case. 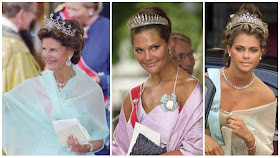 A selection of firm favorites from the Swedes: Queen Silvia (left) wore the Nine Prong Tiara (a.k.a. Queen Sophie's Diamond Tiara), and both Crown Princess Victoria (center) and Princess Madeleine (right) wore their signature pieces - the Baden Fringe Tiara and the Modern Fringe Tiara, respectively. They were also sporting the results of a seriously beachy summer, apparently.

Romantic choices from Queen Margrethe (left) and her sister Queen Anne-Marie (right): the Baden Palmette Tiara with its heart shaped motif for Margrethe, and the Khedive of Egypt Tiara for Anne-Marie. The Khedive, of course, is the traditional wedding tiara of the family. Their sister Princess Benedikte (center) wore her pearl and star tiara. Her jewel box must have been all out of overtly romantic selections. 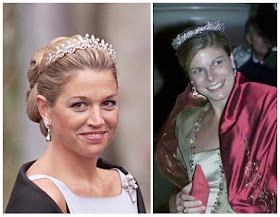 Look! It's Máxima's first tiara appearance (left)! History in the making, and she wasn't even a princess yet. Love it. She wore the Antique Pearl Tiara, sans pearls - an understated choice for a not-quite-princess. Princess Laurentien (right) was new to tiara appearances as well at this point, being a newlywed. She wore the Ears of Wheat Tiara in a fashion that I think makes her head look unduly square. Not a fan, I'm afraid. 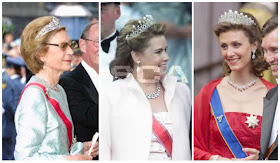 Big turnout from Luxembourg, and as usual they displayed the amazingness of the family jewel collection. Grand Duchess Joséphine Charlotte (left) wore her Belgian Scroll Tiara, while Grand Duchess Maria Teresa (center) wore the Pearl and Diamond Choker Tiara. Princess Sibilla (right) wore a tiara of her own possession, her Art Deco Tiara. I have a desperate need for her to show up at more tiara events so I can see it more; it's a crime to keep things like this hidden away. (This is the second setting we've seen it in, by the way: she wore the smaller setting to Princess Alexandra's wedding.)

And finishing it up, Queen Paola (left) wore Queen Elisabeth's Diamond Bandeau Tiara, Queen Sofia (center) wore the Mellerio Floral Tiara, and the Countess of Wessex (right) wore her wedding tiara. It's not my favorite piece, Sophie's tiara - but at the time, it was her only option. What are ya gonna do?


Which is your favorite tiara appearance here?