Back to the boutique opening for a moment: the new boutique includes a whole area named for Charlene, and she wore a VC&A necklace of white gold, turquoise and diamonds from the "Princess Charlene Magic Alhambra" set. And there's another gem to be spotted from the opening as well: 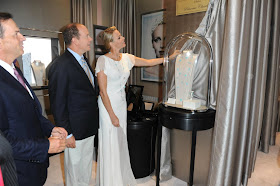 What's that behind Charlene? It's a portrait of her wearing the Ocean Tiara in its proper tiara format, taken by Karl Lagerfeld. Looks...interesting. I am still waiting until she wears it for an event to judge.