The end of this month marks the 15th anniversary of the death of Diana, Princess of Wales. And since you know I like to do my commemorating in frivolous fashion, I thought a look at the late princess' signature stone was in order. Sapphires and Diana are inseparable in my mind - not only did she have a magnificent collection of them, she had the eyes to bring them out. These are just a few of my favorites from her sapphire stash.

Obviously, we must being with The Ring.

Diana's engagement ring was not a bespoke piece, oddly enough for a royal engagement ring, but rather available from the Garrard catalog to anyone (anyone that could afford it, of course). With its enormous sapphire and surrounding diamonds, it's far from a unique design but yet it's instantly recognizable. Prince William chose to give Kate Middleton his mother's trademark ring to mark their engagement in 2010.

Diana's wedding yielded one of her most impressive sets of jewels, a sapphire suite from the Crown Prince of Saudi Arabia. The Asprey set included a massive sapphire pendant in a diamond sunray frame suspended from a diamond necklace, a watch with a sapphire and diamond band, a bracelet, a pair of earrings, and a ring. Diana eventually had the watch and the ring reset into new jewels, including another pair of earrings and a choker she famously used as a headband. 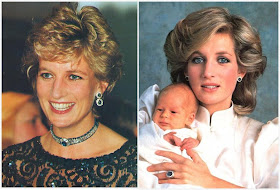 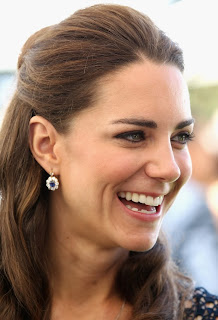 The choker seen above is yet another piece out of Diana's sapphire collection, but none will ever quite hold a candle to The Choker to End All Chokers, if you ask me. 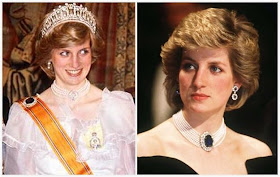 Bliss. This egg of a sapphire surrounded by diamonds was a brooch given to Diana by the Queen Mother as a wedding present. Though she wore it a couple times as a proper brooch, she soon performed some jewelry magic and stuck it in the center of seven strands of pearls. Of all Diana's jewels - even the tiaras - I honestly think this is the piece I'd most like to see in use again today. Et toi? What are you hoping to see again?