Newsflash: the Olympics are still happening. Hey, you can always count on me for the breaking news. Let's catch up to to yesterday (Tuesday) with a few royal highlights, shall we? 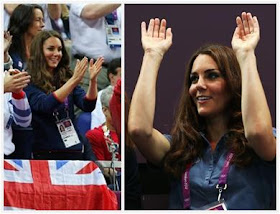 Day 9: The Duchess of the Olympics hit up gymnastics, handball (where she seems to have done the wave, which for reasons unknown to me is A Big Royal Story every time it happens) and later athletics with her two princely escorts (Wills and Harry). But the biggest surprise of all was that she missed out on Andy Murray taking home the gold in a Wimbledon rematch. Not to worry, the Duke of Kent was there to pick up her tennis-loving slack. 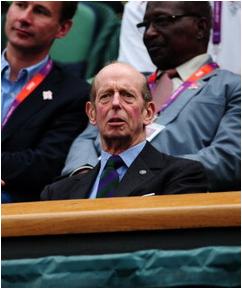 He's President of the All England Club, and I'm not sure he's left since Wimbledon. Maybe they just keep him there permanently, in case of tennis emergency. 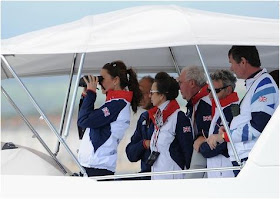 On Day 10 Kate enjoyed a spot of sailing alongside trusty Anne and Tim. Those royals, they love them some boats. Good thing nautical fashion treats them well. I believe they caught the Women's Laser Radials race, which probably sounds more bionic than it actually is.

The Oranges were back at the equestrian arena as was Prince Albert and there were giggles. They also got to see all their intrepid poncho-clad cheering pay off in folds as the Dutch show jumping team adorned their amazing orange blazers with a silver medal.

AND THEN THE MOMENT WE'VE ALL BEEN WAITING FOR ARRIVED. 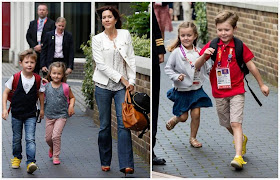 That's right folks, Isabella's in town and she's got sassy shoes. (Oh, a uniformed sailor doesn't salute you when you alight from your yacht each morning? How sad for you.)

Everyone gathered to watch Princess Nathalie compete in dressage and also because those royals, they love them some horses (probably even more than boats).

Even with Isabella joining the party, my prize for Best Royal these past couple days has to go to Harry. 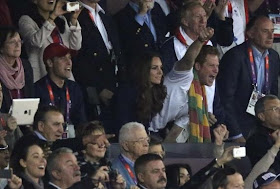 First of all, he sported his Bob Marley scarf (given to him by Marley's widow during his trip to Jamaica earlier this year) to watch his buddy Usain Bolt defend his title in the 100m race. This is by far the best use of festive accessories we've seen yet. (Fun fact: Harry is part owner of a racehorse called Usain Colt. Heh.)

And then on Day 11, it was buckets of adorableness between Harry and his cousin Peter Phillips as they watched Britain tear up the velodrome in cycling. There were fist pumps, hugs, and even a few burgeoning tears. 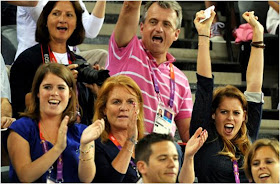 The Yorks were there; Beatrice was loving it, alongside her sister and mother. 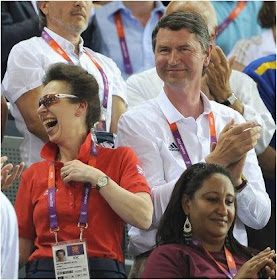 Anne check: she's also loving it! She even got in on some of that Harry cuteness AND THEN MY BRAIN EXPLODED FROM THE AWWWWS.

And that'll bring us up to speed, though we will certainly be behind again by the time this posts. Never ending fun, these Olympics. What are you loving right now?

(By the way, this post stands in for our normal Wedding Wednesday post, since I'm basically married to the Olympics at this point.)