Have you made your nominations for your Top 10 Best Royal Wedding Gowns yet? (It's actually shaping up to be a close battle, interestingly, so get to it!) If not, perhaps this will serve as a little random inspiration for you: a sampling of some of the wedding gowns out of Valentino's studio over the years.

Valentino is forever popular in the royal set. Several royals have chosen to start their royal marriages with a couture Valentino creation...with mostly good results? Mixed results? You be the judge. 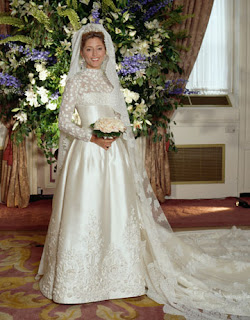 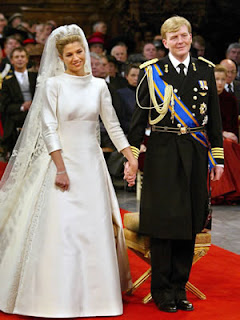 Perhaps the two most famous Valentino gowns belong to Marie-Chantal Miller, worn for her 1995 wedding to Crown Prince Pavlos of Greece, and Máxima Zorreguieta, worn for her 2002 wedding to the Prince of Orange. Put the two side by side, and they have more in common than you might think - but Máxima wins it for me (and will she win it for you? We shall see when your list is complete). 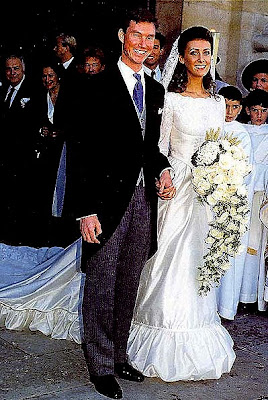 Another bride from the Valentino School of Adornment is of course Sibilla Weiller, who chose the dust ruffle to end all dust ruffles for her 1994 wedding to Prince Guillaume of Luxembourg.

Simpler, but still working that hem detail, was the Valentino creation for Paola de Frankopan's wedding to Lord Nicholas Windsor in 2006 - an Italian designer for a Vatican religious wedding. The dress is a one-shouldered affair covered with a shrug for the church and a long veil. 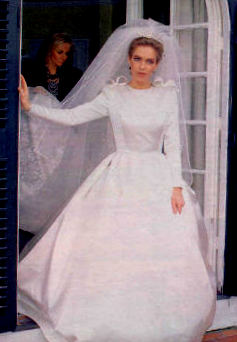 Archduchess Sophie of Austria picked another relatively simple Valentino for her 1990 wedding to Mariano Hugo, Prince of Windisch-Graetz. I've seen my fair share of dresses with bow overload, but this one gets special marks for nearly accomplishing it with two simple shoulder bows alone. 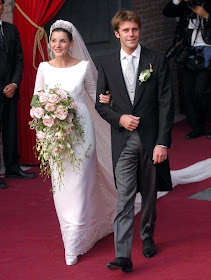 Clotilde Courau's Valentino gown at her 2003 wedding to Emanuele Filiberto of Savoy had to accommodate the couple's daughter too, born just a few months later. The dress is okay...but it's the colorful tiara I'd rather look at anyway. 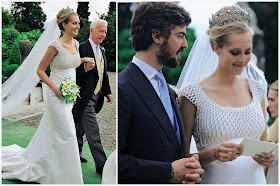 And on that expectant note we have one final Valentino wedding creation, and it's my favorite of recent years: Countess Matilde Borromeo's gown for her 2011 wedding to Prince Antonius zu Fürstenberg. The bride (half sister of Pierre Casiraghi's girlfriend Beatrice Borromeo, and at the time expecting the couple's first child) looks lovely in that dress, with just enough detail to keep interest but not enough to compete with that mega tiara (from the groom's family). Love.


Which is your favorite Valentino royal wedding gown?

(Feel free to add others in the comments!)