You know what? 2012 was a truly excellent year for tiara lovers. Even though the Diamond Jubilee didn't yield any tiaras (oh Windsors, why must you toy with us like this?), the year had plenty of glittering events. And those glittering events seemed extra packed with new bits and pieces, tiara debuts, and tiara news and rumors. Get your jumpy claps ready for a review of the year in tiara surprises: 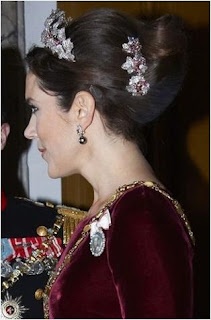 At the beginning of the year, Mary showed us the versatility of her ruby parure redesign by debuting the hair clips she made with extra bits from the tiara at the New Year's gala.

January also brought Queen Margrethe's Jubilee celebrations, with two wondrous tiara events. We got to see Princess Theodora borrow her aunt's Turquoise Bandeau and the return of the Alexandrine Drop Tiara on the first night, plus the reappearance of Queen Sophie's Diamond Tiara on the second night (squee!).

This year was officially declared the Year of Tiara Surprises in October when we delighted in the pre-wedding dinner in Luxembourg. Princess Stéphanie chose the larger of the two floral tiaras for her first tiara appearance, while Princess Tessy got to wear Marie-Adélaïde's tiara for the first time. Princess Sibilla wore Queen Victoria Eugenia's Aquamarine Tiara, tidily squashing rumors her family had sold it back to the Spanish royal family (and generously allowing Countess Diane the chance to wear her first tiara, borrowing Sibilla's Art Deco Tiara). Princess Caroline wore the Cartier Pearl Drop Tiara for the first time in a long time. The Countess of Wessex surprised with a new (to her) piece, the Five Aquamarine Tiara, and Crown Princess Victoria introduced us to another piece of the family's cut steel collection. Best tiara event of the year? INDEED. 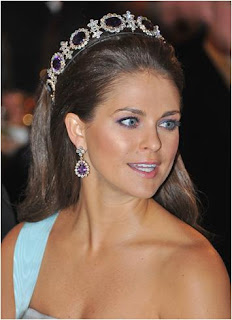 And in one final tiara surprise for the year, Princess Madeleine wore Queen Josephine's Amethyst Tiara for the first time at the Nobel Prize Awards Ceremony.

Many had hoped for a larger surprise from the Nobel Prize Ceremony, because earlier this year a report surfaced claiming that a pink tourmaline tiara belonging to Countess Estelle Bernadotte (and prior to that, Queen Sophia, shown wearing it on the left above) was bought back by the Swedish royal family. Alas, we'll have to wait longer for visual proof. We do know for sure that the Danish tiara collection grew this year, as Queen Margrethe was given a tiara for her Jubilee from Greenland (center above). We also sadly saw a tiara collection shrink this year, when a thief stole a tiara from Princess Christina of Sweden (the one she wears above right).

Click here to see posts covering many of this year's tiara events.


What was your favorite tiara moment this year?

And as a bonus holiday treat... Last year's documentary on royal jewelry, De Kongelige Juveler, is again available for viewing online! The narration is in Danish, but there are interviews in English and French, so it's easy to understand. It's a rare chance to hear the royals talk about their jewels, so make some time to watch! Part 1 discusses the jewels of Empress Joséphine as well as the jewels of her many descendants in the royal houses of Denmark, Sweden, and Norway. Part 2 focuses on Russian jewels. (Note: these videos are only up for a limited time.)