It’s Nobel Prize time! A.k.a. the December Tiarafest! And also, you know, time to honor some crazy smart people, but we can leave that discussion to the serious places of the interwebs. This here is magpie central, and we’ve got some fashion to review. Sunglasses at the ready, please.

We begin in Norway, where Crown Princess Mette-Marit and Princess Ingrid Alexandra attended the Save the Children’s Peace Prize Festival prior to the awarding of the Peace Prize itself (which went to the European Union this year) and the evening banquet.

Mette-Marit was all about the earrings today: crazy colors for the day, and dangling intricacies for the evening. Lurve it. Have to, basically, because there’s not much else to get super excited about in her typical neutrals-n’-navy wardrobe. 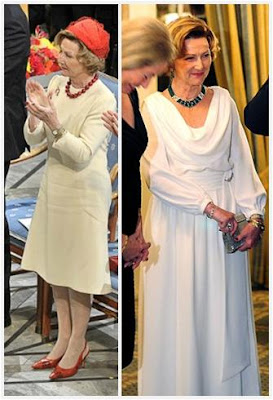 Crisp clean white is the preferred Norwegian neutral. So says I, and also Sonja.

And now we’re off to Sweden, where the rest of the Nobel Prizes are awarded and things get really sparkly. YAY. 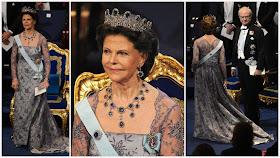 Silvia usually chooses between the Nine Prong Tiara and the Leuchtenberg Sapphire Parure for the Nobel ceremony, and I must commend her non-pronged choice for the evening. And I must commiserate, because the poor dear looked a little sick. Looking at tiaras always makes me feel better, but I don’t know that wearing a massive one for hours on end would do the same trick.

I forgot to specifically mention in my list of Nobel dreams that I wanted a button-free evening, and look what happened. Le sigh. Victoria’s added an extra string of diamonds to the base of the dreaded Four Button Tiara, but it’s not helping. With that severely parted tiara hair.......no. So let’s focus on the distractions, because the rest of the look is in fact exactly what I wanted! We’ve got the look of an Elie Saab (that makes two years of maximum sparkle, fully sequined gowns in a row – though I will confess the color was rather radioactive on the video stream). And we do have a first for Victoria: no new-to-her tiara, but this is the first time she’s worn the historic Bernadotte emerald demi-parure, which is usually left to Silvia. Movin’ on up in the collection, that’s what we like to see. (But please, someone get this family an emerald tiara, ASAP!) 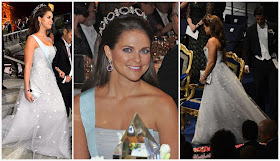 Thankfully, I did say that I would like the amethyst tiara on Madeleine, and looky here: she did it! And it looks amazing on her. Tricky tiara to wear, this one, but I think she’s nailing it. She’s paired it with the Angel Sanchez gown she wore to her sister’s pre-wedding festivities. Fun fact: this gown actually comes from a bridal collection. Foreshadowing? (I hope not. This is kinda boring, amethysts aside.)

And finally, we’ll hop back and forth between the two countries, because if I don’t throw in some gentlemen you lot will mutiny, you're ornery like that.


Best in Gents
Prince Carl Philip
I’m usually on the fence about Carl Philip. Dude might need to seek out Hair Products Anonymous, is all I'm saying. But the scruff: now we’re talking.

Tomorrow, the fun continues. We’ll have a separate entry for that.


Who do you say wins the Battle of the Nobels, Day 1?