Happy New Year! Are you alive? Did you make it through the holidays? I’m just barely hanging on myself, so let’s have a dose of our favorite elixir to make it all better: tiaras! The Danish royal family gets right to business every January with the New Year’s Courts (or Levees). The first banquet is usually the most formal event of the year for them, and they don’t disappoint in the splendor department. 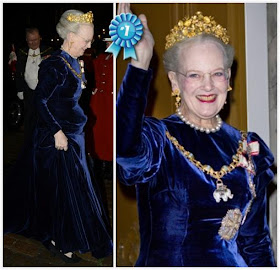 Well, isn’t this nice: Daisy saw our roundup of tiara news from 2012 and decided to keep us rolling in 2013. This is the Naasut Tiara, her 40th Jubilee gift from Greenland, and this is its grand debut. You can read more about it in my entry from when it was presented (click here), and I suppose we’ll have to give it a proper Thursday honor now that we’ve seen it in action. Hurrahs for the spirit of wearing new gifts aside…I’m not sure I’m a fan. It’s so aggressively gold, no? I’d like to see it again with a gown and hairdo designed specifically for it, instead of these repeats. 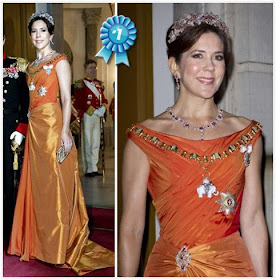 Seems a low key year for Mary, doesn’t it? A repeated Jesper Høvring gown (worn to this same event three years ago), downsized ruby set, not even a fur wrap. And yet! It looks fresh, somehow. I think it’s because I particularly love this way of wearing the ruby necklace and earrings – I love the set more every time she switches it around. 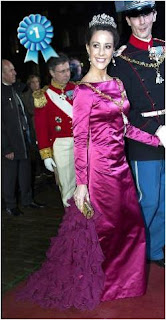 It's bright, it's shiny, it's come straight out of some fictional conservative Las Vegas theater to put every royal butt ruffle to shame. But maybe this is why real Vegas showgirls don’t bother with modest versions of their stage attire: too much ironing required. Oh well, at least someone wore a new dress this year. So go on, Marie. Shake your tail feathers.


Best in Gentlemen
Crown Prince Frederik
With due respect to Henrik's special talent for looking disheveled even in his finest duds - I’d rather have a uniform, and I’d rather have Frederik’s, so I’ll give him the win.

There are two more receptions (still formal, but no tiaras), on the 3rd and 4th. We’ll talk about those later in the week.


Who's your favorite here?