Since the Danish royal family was kind enough to kick off our year with a brand new tiara spotting, we shall honor them in turn (and hopefully cast a spell for an extra sparkly year?) with a double Tiara Thursday today. I knew you wouldn’t mind.
New tiaras in a royal house are a rare thing these days, what with the sad state of the economy and the enhanced scrutiny on royal finances and on royal gifts. Thankfully, that didn’t stop Greenland from honoring Queen Margrethe appropriately for her 40th jubilee, and the result is the newest addition to the Danish royal tiara collection. During its official presentation, it was referred to as the Naasut Tiara, meaning “flowers” in Greenlandic.
This is a true example of a modern tiara design. First, it makes use of an unusual material ratio: the gold is the star of the show rather than the diamonds which are also included, and we usually see that ratio flipped. (Some initial news reports also stated that there were rubies in the tiara, though I can’t personally see them.) It also keeps with modern standards for eco-friendly materials: the gold was first used for gold coins produced for the International Polar Year.
The Greenland gold was melted again to be used for the tiara, which was first created as a bouquet of flowers from goldsmith Nicholas Appel. The arrangement into a tiara, and the design of the accompanying earrings, was done in consultation with the creative Margrethe. There is an element of flexibility here: the tiara can be used as five brooches. The cost, reported to be around $53,000, was met by the Greenlandic government and five companies. 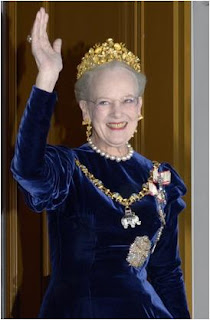 The diadem was presented to Margrethe in 2012, her 40th year on the throne. She first wore the piece in public for the 2013 New Year’s Court banquet. It’s a high honor, really – the banquet is one of the most formal occasions of the year, and she tends to wear her most important pieces. In wearing the tiara, she proved yet again that you can never judge a diadem without ample examples of it in use; this is both larger and of a brighter gold tone than I expected. The extreme yellow appearance of the tiara is no doubt enhanced here by the contrast with the Queen’s trademark bright silver hair. Sadly, I’ve never been one for mixing metals, and so I’m not sure I’m a fan. (Yet.) That said, I do think it’s preferable to other modern gold tiaras, such as Queen Sonja's galactic number.


How do you think this compares to other modern royal tiaras?