It’s time to take a deep breath and dive into the stories behind a couple of my least favorite tiaras, the Swedish button tiaras. (I know some of you out there love them, so now is your time to shine.) “Button tiara” is a generic term used for tiaras with primarily circular elements usually sticking up from a frame, sometimes former jeweled buttons brought to new use. In Sweden there are two, the Four and Six Button Tiaras. Despite their bland names (and despite the level of scorn they can bring), they include some valuable items from the Bernadotte historical collection.
The buttons from the Six Button Tiara are identified by the Royal Court as those which King Carl XIV Johan (Jean Baptiste Bernadotte) affixed to the crown used for his coronation in 1818; these were later removed. Some of the buttons are said to have come from his gala uniform; some are said to be older, having been worn by Queen Louisa Ulrika of Sweden or even her mother Sophia Dorothea, Queen consort in Prussia. By any explanation, they are centuries old and are of great historical importance. Ten buttons have been added to frames to create two different tiaras for the Swedish royal family.

The Four Button Tiara includes 4 identical buttons. They are mounted on a simple metal frame, with no additional connecting elements or base detail. The tiara was in use by at least the early 1960s by the four older sisters of King Carl Gustaf. With so many young princesses, the collection was in need of more suitable tiaras - as opposed to the larger tiaras which are fit for a queen or someone more mature.
Almost all the Swedish royal ladies have worn this tiara in the years since; a notable exception is Queen Silvia, who has never worn it in public. Princess Madeleine doesn't appear to be a big fan either, wearing it only once to date. The King's sisters, when they attend tiara events, now tend to use other pieces.
Today, we usually see it on Crown Princess Victoria. And it's her use that gains the tiara the greatest level of scorn, I’d say; she has a tendency to wear it sticking straight up from a flat hairstyle so that there is no background for the buttons…and it looks like the lights on a Jeep. At the Nobel Prize ceremony in 2012, Victoria added a temporary diamond rivère to the base of the tiara, adding some substance to the piece. 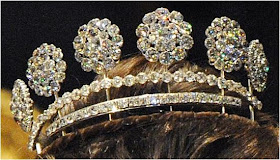 The Six Button Tiara was created later, and was apparently intended for use by Princess Lilian, wife of Prince Bertil (the King's uncle). These six buttons are not identical - the center four match, and the two at each end are of a second design. Both designs are different from those used in the Four Button Tiara. The base includes two rows of diamonds, the top row being longer than the bottom row.
As with the Four Button Tiara, this has made it around to many of the Swedish royal ladies. Queen Silvia has worn this one, though I believe just once in public. Today it is most often seen on either Crown Princess Victoria or Princess Christina. Victoria has added a temporary diamond rivère to the base of this one in the past as well. It's a tall tiara and, like the Four Button, tends to look best when it isn't just sticking straight up from a flat base.
Longtime readers may have observed that I can’t help but mention how much I dislike these tiaras whenever they appear. The buttons themselves are important pieces; they are also quite lovely and sparkly, on their own. My problem is that these tiaras feel like a rather haphazard treatment of such precious items, particularly the Four Button (in my own humble and unimportant opinion, of course). Frankly, I think the buttons deserve better.

Video: Nobel 2011, the Six Button on Victoria
Having none of the practical constraints like time or money the jeweler may have been dealing with (and none of the expertise either), it's fun to imagine changes for these pieces. I'd love to see one button knocked off of each. (Uneven quantities look better. Use the extras as brooches!) For the Six Five Button, I’d love to see something like the Pearl Button Tiara’s base. For the Four Three Button, a more elaborate setting would be lovely – I’m thinking about how the old Nizam of Hyderabad Tiara accommodated three brooches. These treatments would still leave the buttons as is, which seems to be a requirement, but would look a little more finished to my eye.


What say you: perfect as is, or would you make some changes? (And if so, what?)

P.S.: I hear all your requests for various Dutch features, and I say stay tuned as as we get closer to April!