This is going to be a monthly thing, if you didn't guess that from January's edition of royal brides. February, take it away: 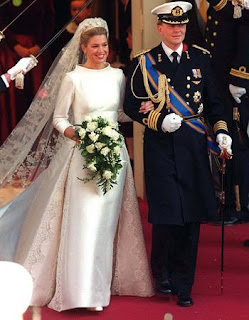 The Prince of Orange and Máxima Zorreguieta
February 2, 2002
I never say no to another glimpse at #3 on your top royal wedding gown countdown. And it's extra appropriate now that we can count down the days until these two kids are the King and Queen! 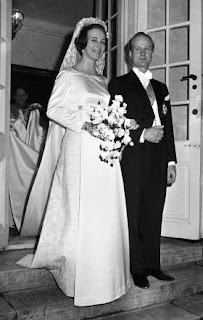 Princess Benedikte of Denmark and Prince Richard of Sayn-Wittgenstein-Berleburg
February 3, 1968
Like other Danish royal wedding gowns, this is chock full of heirlooms. We'll take a closer look later this month. 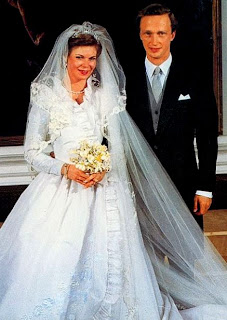 Princess Marie Astrid of Luxembourg and Archduke Carl Christian of Austria
February 6, 1982
It's the dress that manages to be both 1980s and 1950s, with a call back to her mother's wedding gown. 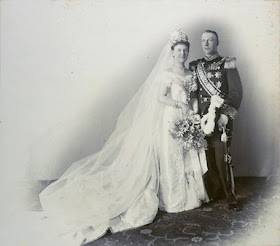 Prince David Bagration of Mukhrani and Princess Anna Bagration-Gruzinsky
February 8, 2009
I'm including this one because I'm a sucker for a high collar wedding gown, but also because it's kind of an interesting story: this marriage united two branches of the Georgian royal family with conflicting claims to the (at the moment nonexistent) throne, thus creating a stronger claim should the return of a monarchy ever become a legit possibility. It sounds like one of those politically advantageous royal/royal marriages made back in the days when love wasn't a part of it, and it really started to sound like that when some started to say that the couple had separated immediately after the wedding. (I'll point you to his Wikipedia page for a brief breakdown.) Scandal! Except - the couple welcomed a son in 2011. So...never mind? Intriguing. (And hopefully all false. I mean, happiness for everyone is my official policy.) 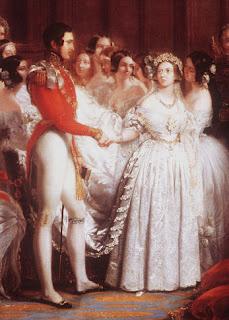 Queen Victoria of the United Kingdom and Prince Albert of Saxe-Coburg and Gotha
February 10, 1840
The white wedding gown, this one. 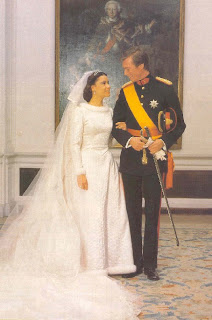 The Hereditary Grand Duke of Luxembourg and Maria Teresa Metre y Batista-Falla
February 14, 1981
Nothing says I wuv you like a Valentine's Day wedding, am I right?

Princess Mary of the United Kingdom and Viscount Lascelles
February 28, 1922
The only daughter of King George V and Queen Mary pulled in quite a jewel haul for her wedding, including Queen Victoria's Sapphire Coronet.


Which is your favorite February gown?