Gold Star: Máxima in the Evening

I added Máxima's evening attire to the post on her inauguration gown, but I'm gonna feature her again because it needs to be said: girlfriend looked good. It was her second Jan Taminiau look for the day (huzzah! Can we get a switch to mostly Taminiau instead of...well, you know?), a burgundy-purpleish lace number with an elegant neckline and just enough train to make it count without dragging her down. 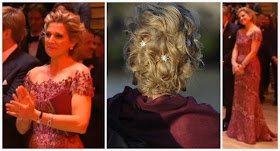 This was worn to the water pageant and the dinner following, and unfortunately because it was outdoors and on the water she ended up covering that masterful dress with a wrap (two wraps, part of the time) for most of the evening. But the dress wasn't the only sparkling thing: this was no tiara event, but Queen Máx still wore diamond stars in her hair, because she's our girl.

Video: A stop on the river cruise, and the gown in action
The King was in black tie, while the princesses wore their Natan dresses from earlier in the day with capes also provided by Natan. 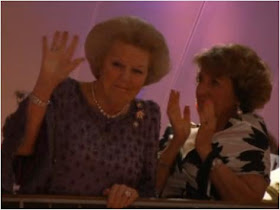 Bea was there too, in purple no less. Once again, she's not only color-coordinated with Máx, but they're jewel-coordinated too - notice the diamond stars on her shoulder - and I am once again charmed by their teamwork. Bea's accompanied there by her sister Margriet, wearing Addy van den Krommenacker, as several members of the family were.
The royal guests were there too, though this was not their event and their presence was subtle. Mary repeated her gown from the Luxembourg wedding, and managed to sneak in some bits from her ruby parure (major earring alert!), so she was my default fave. Mabel's surprisingly understated in her Viktor & Rolf, but still all bow-ed up. (I've heard from several of you that the bow on her shoulder at the inauguration was, according to reports, in fact a bow from her wedding dress, which just breaks my heart. She looked especially emotional all day.)
Annette's wearing her inauguration dress without the jacket. I thought it was curiously dramatic with, and without I'm in love.
Plenty of glitter and sparkle among the guests, you know I approve. I loved Victoria's hardware above, and - this will come as a shocker - Mozah's particularly enchanting to me. (Some of you called her day outfit scary. No, my loves, no. We call that fierce.)

Gold stars nearly all the way 'round, don't you think?

And oh yes, before I forget, there was a brunch today for those still around, and then the royal family departed the palace to get back to business. 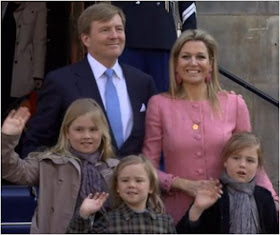 NOS has a short video of a few of the guests departing, click here to see. And click here to see Princess Beatrix leaving, once again with cheers of "Bea Bedankt" ("Thanks Bea") in the background.