You know, I thought the vote for the ruby addition to your ultimate tiara collection would be closer than it was, but nope. We had a clear winner, and that winner is... 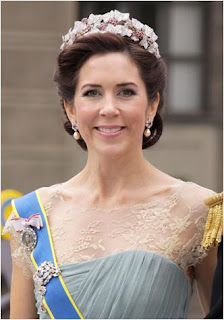 The biggest set in Crown Princess Mary's collection has now joined yours, and I don't blame you - it made my ultimate list too! The extensive set, showcased well by and with added flexibility courtesy of Mary, is irresistible.

The Danish rubies may have ran away with the top prize, but there was fierce competition for the runner up slots.

2. The French Crown Ruby Tiara. This one offers a big ruby impression, but we're lacking in representations of it actually in use.
3. The Oriental Circlet. A favorite of mine too, this one has the superb design eye of Prince Albert behind it, but it is not very ruby-ish.
4. The Greek Ruby Parure Tiara. A lot of the same pros and cons as Mary's here, really.
5. Princess Ashraf's Ruby Tiara. Ditto the above, really - there are a few examples of Ashraf wearing this tiara, but not many.

Here's your ultimate tiara collection in full, so far:

The next poll is not too far away, so stay tuned!