Fresh off our month of Dutch features, it's time to focus your ultimate tiara collection on the stone the Dutch collection happens to be particularly rich in:

Rubies are up there with emeralds and sapphires as colored precious stones represented in many royal collections. They work well in natural interpretations like flowers and wreaths, but motifs are plentiful.

The Dutch collection, as if you need a reminder at this point. The Mellerio on the left above, the Peacock on the right. And you can throw in the ruby version of Queen Emma's Diamond Tiara, if you want.

QEII's collection is represented by the old Oriental Circlet, a Prince Albert special, and the new Burmese Ruby Tiara.

More leaves come from the Strawberry Leaf Tiara - previously in Queen Victoria's collection, and previously including rubies though they were eventually removed - and the ruby version of Queen Fabiola's Spanish Wedding Gift Tiara.

There are particularly tall choices, too - the lotus flower tiara (above left) owned by Marie Alexandrovna, Duchess of Edinburgh (and since sold), and the Edward VII Ruby Tiara that belonged to Crown Princess Margaret of Sweden and is now worn by Queen Silvia.

From Monaco we have the Bains de Mer Tiara, and a probable loaner double row ruby tiara worn by Princess Grace. Spain also has a double row of rubies (which can also be worn as a single row tiara - very flexible) known as the Niarchos Rubies, which were a wedding gift to Queen Sofia. 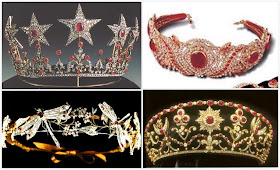 And finally, a few more interesting formats (clockwise from top left): the Württemberg ruby star tiara, a dense ruby tiara owned by Empress Elisabeth of Austria, the Milford Haven Ruby Tiara, and a dragonfly motif tiara we've seen on the Duchess of Castro.

As a reminder, here's what your ultimate tiara collection looks like so far:

Ready to vote for your favorite?
-Vote for one tiara in the comments. (If you're mentioning multiple tiaras in your comment, indicate which one gets your vote, or I will just count the first one.)
-I will also count the number of "likes" or up arrows on those comments, so you can vote that way too.
-Non-royal tiaras and tiaras that no longer exist are fair game too.

And a programming note: The blog returns on Tuesday!


UPDATE: Thanks for all your contributions, voting is now closed!