All the royal peoples headed to the U.S. last week. To my great disappointment, it was not for the purpose of remaking any Eddie Murphy films. But we can look at what they wore anyway. I suppose.

We start with the obvious: HARRY. IN UNIFORM. RED (make that GINGER) ALERT.

Video: Day 1 of the Warrior Games
Harry was in D.C. and then Colorado, and there were 1) uniforms and 2) FLOTUS cuteness and 3) Olympian cuteness and 4) so, so much more. A+.

Of course, Prince Harry got the most fanfare, but we know better - other royals deserve some attention too:

Come on down, Haakon and Mette-Marit! On down to Texas, specifically, where the Norwegian crown princely couple started their tour (click here for your Haakon fix via video). Their five day tour also took them to California, where in addition to official engagements, they hit a rock concert for a Norwegian band, because why not. Mette-Marit was back on her best daytime form, I thought - simple and mostly white, with some pops of color for good measure. My favorite was the yellow Valentino with the white coat; least favorite...probably the Chanel with the long coat and pleated skirt, which she paired with some serious braids (click here for an overview with a look at some of the details, including that 'do). 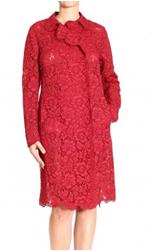 Oh, and if that red Valentino coat looks familiar...see her coat for the Luxembourg wedding. Now that's bulk buying. 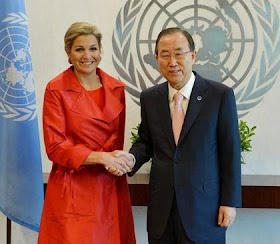 Paying a visit to the U.N. in New York City was Queen Máxima, who met with Ban Ki-Moon. It was the second occasion in the week (the first being a family outing to a concert) when she showed up with her hair up, which I think is some kind of record. Mark it on the calendars, kids. Her visit was pretty much an incognito one; actually, Crown Princess Mary was in New York prior to the Dutch inauguration, also an extremely quiet trip.

Queen Máx just missed another Queen in NYC - Queen Silvia and King Carl Gustaf started out a visit to America there, hanging out with Princess Madeleine and future son-in-law Chris O'Neill. (Silvia's Moschino jacket was previously worn by Madeleine - which allows me to dream up a scenario in which Madeleine critiques Silvia's tour wardrobe What Not To Wear-style before letting her leave New York, and this amuses me.) They've visited a few eastern locales, including a gala dinner in Delaware with the next best thing to actual tiaras: tiaras as necklaces, specifically the ruby and diamond tiara that once belonged to Crown Princess Margaret. (Rubies and diamonds made for a subtly red, white, and blue outfit for the Queen, I couldn't help but notice.)

With Europe practically emptied out, there isn't much "regular" activity to cover this week.
But a pretty good week for Letizia, no? I continue to like her her double strappy nude heels.


Which U.S. trip is your favorite?