Runway to Royal: The Dutch Inauguration

I said we were done with coverage of King Willem-Alexander's inauguration, but...uh...I lied. Because while we talked about the outfits, and the jewels, and a few of the designers (Jan Taminiau and Jan Taminiau!), we didn't talk about the rest of the designers. Today, a round up of some of the identified designers we haven't already covered in depth - and feel free to add additional designers in the comments!

Apart from Taminiau, Natan was the designer that got the most mentions during our previous coverage. A custom version of a previous look was provided for Queen Máxima for the abdication, and bespoke outfits (and capes) for the little princesses were made - the modifications to the basic design were picked out by the princesses themselves. Natan also provided couture looks for Princess Laurentien and Princess Mathilde for the inauguration, and both paired them with Fabienne Delvigne hats.

But Natan wasn't the sole dresser for these ladies: for the abdication, the princesses wore matching off-the-rack dresses from Pili Carrera. Princess Laurentien also wore dresses from Hardies in The Hague, and Olvi's brand.

Another Dutch designer who fared very well at the festivities was Addy van den Krommenaker, who did quite a few dresses for Queen Beatrix's sisters and their families. Modekoningin Máxima had great coverage of the festivities from a Dutch fashion perspective, including the eagle eyes for all these and Laurentien's designers.

Unsurprisingly, Princess Mabel stuck with her wedding gown designers, Viktor & Rolf. Her red gown is actually a repeat. Though it was reported that the bow on her inauguration dress came from the wedding gown, it looks like that's not true - though the inspiration for the selection seems clear.

Also unsurprisingly, Valentino made several appearances. Máxima repeated an older gown, while Mette-Marit (always a Valentino fan) and Sheikha Mozah had new couture to show off. The Qatari royal family actually bought the Italian fashion house a while ago, so I suppose you could say she was representing the home team. 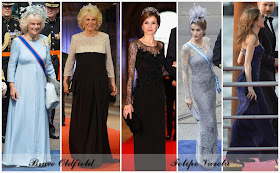 The Duchess of Cornwall was dressed in bespoke Bruce Oldfield, and wore a repeated Philip Treacy fascinator to the inauguration. Princess Letizia was dressed by Felipe Varela, including a repeated navy gown. This is yet another un-shocker...I picture her closet as row after row of Varela garment bags with, like, some Mango bags stuffed in the back. Her hat - now that was something different, you can count on one hand the number of times we've seen her in a fancy hat - was from Maria Nieto.

Crown Princess Mary represented Denmark well, in bespoke Birgit Hallstein (thanks to the commenter that linked to Hallstein's Facebook page featuring shots of the gown in progress), Charlotte Lynggaard, and a repeated Jesper Høvring gown. Crown Princess Mette-Marit found her fix of long printed gowns at Giambattista Valli for the pre-inauguration dinner.

Elie Saab was represented by Hereditary Grand Duchess Stéphanie and Crown Princess Victoria, who repeated an older gown. Victoria also threw in some Escada for the ceremony, paired with a Philip Treacy hat, and bejeweled Jenny Packham with a By Malina coat to wrap it up.


Who had the best designer-to-royal match?