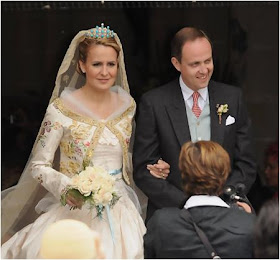 HRH The Duke of Vendôme and Philomena de Tornos y Steinhart
March 19 and May 2, 2009
Paris and Senlis, France

By pure coincidence, we seem to be in a bit of a French mode around here: last week, a look at one of the parures that belonged to the crown jewels of France, and this week, what would have been the wedding of the heir to the French throne (under a specific set of circumstances, I suppose - there is more than one claim out there to that nonexistent throne). The Duke of Vendôme is Prince Jean of Orléans. His father is the Count of Paris, who is the Orleanist claimant to the French throne. Jean is his heir, and claims the title of Dauphin of France. 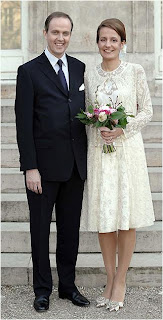 Jean was first engaged to marry Duchess Tatjana of Oldenburg, but their engagement was called off just a few weeks before their scheduled 2001 wedding (issues of religion - he is Catholic, she is Protestant - are often cited). But luck was on his side when he tried again, and he married Philomena de Tornos in 2009. They wed first in a civil ceremony in March in Paris, when the bride wore an intricate white day dress and embellished gold shoes. 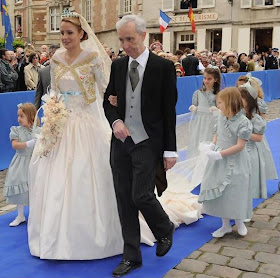 Their religious wedding in May was the main event, though, with a gown to match. It was held in the ancient town of Senlis, and the bride's ensemble had a certain historic flavor to it. The Christian Lacroix dress bore similarities to a gown that walked the runway in the Spring 2009 Lacroix couture collection, and was made not long before the fashion house went bankrupt. The gown was made of ivory silk taffeta. It featured a slim bodice with pleated detailing and sparkling embellishment covered in tulle and a voluminous skirt with a ruched back leading into a train.
This entire ensemble is one signature piece after another. The gown and all its volume could stand on its own, yet it's covered by a bolero jacket with enough detailing to steal the show. The floral brocade was inspired by the silks in the Queen's Bedroom at Versailles and featured mother-of-pearl and gold embroidery by the masters at Maison Lesage, the famous embroidery house. The colors of the jacket are accented nicely by the sweet bow of blue ribbon tied around the waist of the dress. 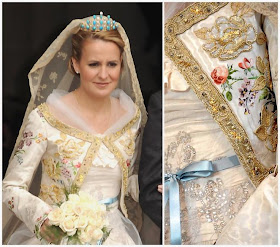 The dress was accessorized with yet more statement pieces, starting with the tiara. The turquoise, diamond, and gold diadem is a modern design and was borrowed from Philomena's aunt Maria del Mar de Tornos y Zubiria, wife of the Earl of Povoa. The substantial veil, made of blonde lace, also comes from the bride's family, and is around 200 years old. As is appropriate for such a delicate piece, it rested on top of another layer.

Lacroix said he wanted to create a look that was both historic and contemporary, and I think that's exactly what he achieved. The pieces from the bride's family - a turquoise tiara and a lace veil in a color other than pure white - could have been seen as obstacles to a traditional bridal gown, but instead they are seamlessly incorporated into the gown through the styling and the light use of color. It's a refreshing change from the white-on-white looks we see time and again. 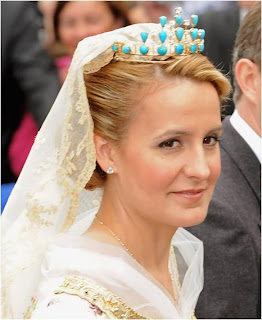 The couple now have two children, Gaston and Antoinette, and we see them at big royal events from time to time. (They do have ties to other royal families - the Duke and Duchess of Brabant were among the guests at this religious wedding, for example.)


Do you think this change from the white bridal standard is a success, or not?