By now, we’ve seen Crown Princess Victoria in a wide array of Swedish tiaras, but she started out nice and light. This is her 18th birthday present from the King and Queen, and it was the first tiara she wore when she began attending tiara events in 1995, the year of that big birthday. It’s mainly a metal piece, with small uprights – forming something of a v-shape pattern, appropriately – supporting a top row of small individual diamonds and sapphires.

I’m often asked to do a list of least favorite tiaras…and I have to tell you, this one might just top such a list. I find it sad, really, the wire-looking bits overshadowing the precious elements. It’s awfully low-key for a future queen – even Princess Madeleine’s 18th birthday tiara had more heft than this. And when she returns to it after wearing other more impressive pieces, it seems even smaller.

Video: The Nobel Prize Awards in 1995, her first time attending
But luckily for haters like me, she moved on pretty quickly. She’s done plenty of exploring in the family collection; what we’ve seen to date is already more variety than most of our royal ladies, and there are still plenty more for her to debut over the years and as she becomes queen. Accordingly, the birthday tiara’s appearances have grown sparse. I believe its last showing was at a representation dinner in 2007. 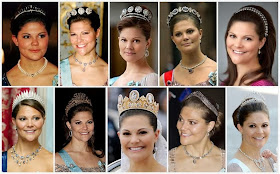 Victoria’s latest new tiara was Princess Lilian’s Laurel Wreath Tiara, one that Lilian said she would leave to Victoria after her death, which came in March 2013. Just recently, details of Lilian’s will have been made public, and reports are stating that Victoria was left not one but two diadems, listed as a diamond tiara and a diadem of gold and diamonds further described as Crown Princess Margaret’s diadem in steel, white gold, and diamonds. This reference is intriguing since the Laurel Wreath is the only one publicly known to have been Lilian’s property. An incorrect interpretation, or new information? We wait to see if we’ll be surprised.


How do you rate the birthday tiara?