I’ve received quite a few questions over time about the Duchess of Windsor (Wallis Simpson, 1896-1986) and tiaras. Though we might not immediately associate her with tiaras, she was occasionally spotted with some sort of sparkling headgear, today’s tiara being perhaps the closest she came to the royal tiara realm as we know it. 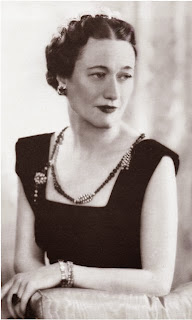 The tiara she’s wearing here was created for her by Cartier in 1949 and is actually a necklace made to do double duty as a tiara when required. The base is a row of emerald beads which were already in her jewel collection; the top features diamond loops in double rows, the diamonds supplied by Cartier. A basically identical piece had been made for Cartier’s stock in the same year (shown below). She wore her version just a few times in tiara form - the Duchess of Windsor may have been known for her magnificent jewel collection, but tiaras were not a big part of her bedazzled self.
That impressive collection (which was auctioned after her death to benefit charity, and parts of which continue to come up for sale from time to time – including a current Sotheby’s auction) was comprised of some seriously modern pieces, commissioned by both the Duchess and the Duke from noted jewelers like Cartier and Van Cleef & Arpels. They were a fashionable couple and were concerned with remaining fashionable, so it’s no surprise the Duchess reset her jewels as necessary to stay current. But some have suggested that their modern taste was backed by more than just an aesthetic concern - it was a conscious break from the traditional styles of the royal collection Wallis would never get to wear. 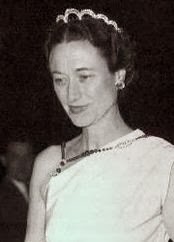 Considering things from that perspective, it’s no wonder tiaras didn’t feature regularly. This necklace/tiara is a nice compromise, I think: interesting and eye-catching in its use of emerald beads, modern and clean in design, but also an unmistakably royal shape when worn as a tiara.