Queen Elizabeth II is on a state visit to Germany - which is being covered in full at the Vault - and she's really working the Saxe-Coburg and Gotha angle with jewels courtesy of Prince Albert and Queen Victoria (including a particularly spectacular turn at the state banquet last night). Today's feature, however, is one Victoria and Albert jewel that she won't be wearing.

Sentimentality ran high in Victorian era jewelry, including in the collection of the monarch that gave the era its name. Queen Victoria placed special significance on the all the jewelry that her husband, Prince Albert, gave her and designed for her. This was a great portion of her jewel collection, as Albert's eye for design took charge of the royal gems during his life. We've admired several of the tiaras to which his name was attached - Queen Victoria's Sapphire Coronet, her Emerald and Diamond Tiara, and her Oriental Circlet, for example - but none of those headpieces were quite as personal as her Orange Blossom Wreath.
As a present for their sixth wedding anniversary in February 1846, Albert gave Victoria a wreath of white porcelain orange blossoms with gold leaves on a braided black velvet band with a silk ribbon tie at the back. The wreath includes four oranges made from green enamel to represent the four children they had at that time, but that wasn't the only meaningful touch. 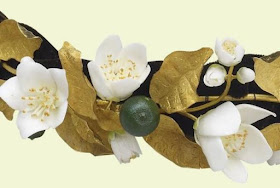 The selection of orange blossom was filled with significance for the couple. The flower represented chastity in the language of flowers; it was also associated with betrothal, as emphasized when Albert sent Victoria a brooch designed as a white porcelain and gold sprig of orange blossom after their engagement. Victoria wore fresh orange blossoms on their wedding day, and just as her gown created a trend for white wedding dresses, she started a trend for orange blossom jewelry. Albert turned his engagement gift into a parure (matched set) by giving her another brooch and a pair of matching earrings in December 1845. The wreath, given a couple months later, was the last piece of the parure.
Queen Victoria loved the gift, writing in her diary that "it is such a lovely wreath & such a dear kind thought of Albert's." She wore pieces of the parure for all of their wedding anniversaries until Albert's death in 1861. After he died, she had the set placed on display in the room where he died at Windsor Castle. The orange blossom parure was not meant to be worn by anyone else, and so the pieces have not been; they are in the Royal Collection and are solely for display.

You can see the parure on display right now, as a matter of fact: Painting Paradise: The Art of the Garden at The Queen's Gallery at Buckingham Palace includes the orange blossom jewels and runs through October of this year. (Thank you to All That Glitters for the heads up!)