View image | gettyimages.com
Grand Duchess Marie-Adélaïde's Tiara, worn by Maria Teresa
At Luxembourg’s recent National Day gala, Princess Stéphanie repeated a tiara for the first time in the three years of her marriage, after a delightful streak of trying something new with each gala appearance. It's a tiara that was worn by Grand Duchess Maria Teresa while she was the hereditary grand duchess, and has been worn by many other family members as well. 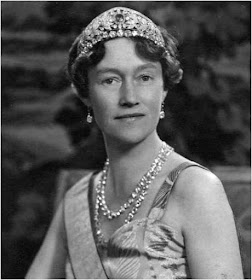 Charlotte, with an extra diamond rivière attached below the tiara
Grand Duchess Marie-Adélaïde’s Tiara (which is known by other names too, including the Nassau Sapphire Tiara and the Grand Duchess Adelaide Tiara, take your pick) features a cushion-cut sapphire surrounded by diamonds as its removable center, with a classic diamond wreath design on either side. A top line of diamonds gives the tiara a kokoshnik feel, and it can also be worn with an additional rivière of diamonds on the bottom.
View image | gettyimages.com
Maria Teresa wears the tiara in 1996. Joséphine-Charlotte (far left) wears the Belgian Scroll Tiara and a sapphire necklace that can also be worn as a tiara

The tiara dates from  about 1865-1870. It belonged to Adelheid-Marie of Anhalt-Dessau (1833-1916), who was the wife of Grand Duke Adolphe of Luxembourg. From her, the tiara began to pass down through the generations of the grand ducal family. It was associated with her granddaughter, Grand Duchess Marie-Adélaïde (1894-1924), who took the throne at the age of 17 and whose short reign did not survive the turmoil of World War I. In 1919, she abdicated in favor of her sister, Grand Duchess Charlotte (1896-1985). Charlotte also wore the tiara, mostly in her earlier years.
View image | gettyimages.com
Stéphanie, wearing the tiara for the first time
The tiara was not often worn by Grand Duchess Joséphine-Charlotte (1927-2005), wife of Charlotte’s son Grand Duke Jean, but it has been worn on several occasions by Grand Duchess Maria Teresa. Maria Teresa started wearing Marie-Adélaïde’s Tiara before her husband took the throne, and she has now shared it with her daughters-in-law. 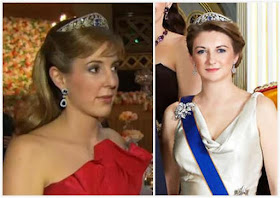 Tessy (left) and Stéphanie (right). Tessy's sapphire and diamond earrings have also been worn by Joséphine-Charlotte and Maria Teresa
The first daughter-in-law to wear the tiara was Princess Tessy, wife of Prince Louis. She borrowed it for the pre-wedding dinner of Hereditary Grand Duke Guillaume and Countess Stéphanie de Lannoy in 2012. Stéphanie was next to join the ranks of family members to don the sapphire tiara, wearing it first to the dinner for the inauguration of King Willem-Alexander of the Netherlands in 2013. The tiara is part of the Hausschmuck, the grand ducal family’s trust. Like family foundations in other countries, that means the tiara is not personally owned by any single family member and will remain with the family for years to come.


Who do you think wears this one best?

P.S.: Luxarazzi started a bit of summer fun - a tiara race! I shared my thoughts on which one might win the prize over there, and you'll want to get in on the voting action.