Readers' Favorite Tiaras, The Rematch: #1. The Girls of Great Britain and Ireland Tiara

Some of the entries on your final list of ten favorite tiaras provoked heated competition, but in the end, none could touch the queen of them all. You called it iconic, you called it the epitome of tiara-ness, you called it your best. And it's my best, too:

The Girls of Great Britain and Ireland Tiara began as an 1893 wedding gift to the future Queen Mary from the "girls of Great Britain and Ireland" and was passed on to the future Queen Elizabeth II as a wedding gift in 1947. Along the way, the diamond design of festoons and scrolls lost the original top row of pearls and was separated from and then later reunited with its original diamond lozenge base. We revisited its whole history last year, click here to refresh your memory.

This design really hits a lot of sweet spots: the scrolls give the tiara interest without being an overpowering motif; the top line isn't solid like a kokoshnik but is still fairly even all around; it's not an enormous diadem but it's far from small. It's almost a tiara designed for universal approval.

Given that, its spot on the top of your countdown (both in 2011 and now) probably doesn't come as a surprise. With countless appearances in action - it is essentially the Queen's favorite tiara; she is said to refer to it simply as "granny's tiara" - and countless appearances in portraits, on stamps, on money, on you name it, the Girls has earned its iconic status. Number one indeed.

And that, my friends, is it! I've loved all the tiara enthusiasm around here this month, and I'm so glad so many of you have joined in. Let's review the results, shall we? 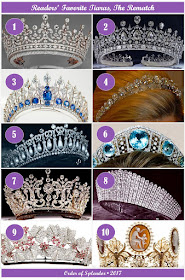 50% British, 20% Dutch, and 30% Scandinavian. Perhaps unsurprisingly, most of these tiaras are represented by families with some of the largest and most famous tiara collections in the world. And most have had active public lives, so to speak, giving us plenty of opportunities to explore their splendor potential. The more we see and the more we know, the more we like.


Any surprises? How'd your faves do? You can go back through all the posts from the rematch by clicking here.

One last note, for the curious: here's how your top 10 shook out in our original Readers' Favorite Tiara vote: 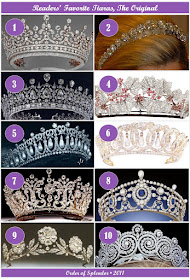